From an interview with Dr. Quinton White, Professor of Biology and Marine Science in Jacksonville University. 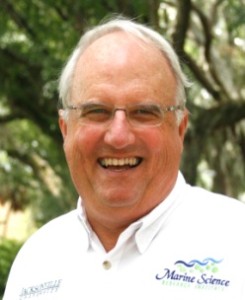 atural process for a creek like Millers Creek is to gradually fill in, it does so naturally.

Waters comes in carrying with it sediments, that waters flows in and deposit the sediments, and water flows back out, but is a very gradual process. So the natural progression of the creek is to gradually fill in and become a marsh. What happen in Millers Creek however is that we accelerated the process, men has caused increased sedimentation in the creek. So what happen overtime is a creek like Millers Creek which will normally flush fairly regularly begins to fill in and that slows down the flushing rate, lowers the water quality, limits the habitat and what it used to be an habitat for fish and manatees, now becomes more like a mud flat. One of the consequences of our man activities has been that we tend to put herbicides, pesticides, we used to burn led in our gasoline that debris falls on the ground and it runs into the river. So the river itself in particular areas like Millers Creek the tributaries becomes an accumulation site for heavy metals and toxic materials. And that sediment in addition to be increasing in depth and silting in also contains pollutants. Is what we call sub-lethal toxicity, in other words, it doesn’t kill the animal outright but impact the way the animal reproduces, so the larvae don’t develop as well the eggs don’t develop as well. In reality there is not a huge impact of marine life because of toxic materials. They are tied up in the sediments, they are part of the food chain so it does get in to the fish, it does cause as I mentioned earlier reproductive problems.

The biggest concern frankly is the loss of habitat as we bulk headed our wetlands, we filled in these grass lands, we found these creeks filling in, they no longer become habitat for the fish, the crab, the shrimp and the manatee, things that need that space. So is more of habitat destruction than the pollutants that I think cause the concern for something like Millers Creek. How does that happen along a creek like this, normally the creek has a slow slopping side and that side has grasses and marshes as part of it, but what we’ve done particularly in Millers Creek is we filled in that marsh, we bulk headed and we have a tendency to have that runoff go straight in the creek as supposed to been filtered thought the grass. The other thing that can happen is all the uphill construction has run into the river, when that construction is over then you have streets and driveways and yards and people start cutting their grass, let grass go in to the streets that washes in to the storm drains, the storms drain come in to the river, the sediments on the road come in to the river and what you end up with is more and more sediments coming faster and faster and faster. The good news is that the toxic levels on the St. Johns River are not alarming, they are high, we want to pay attention to them, we have to be careful how we clean them up. It’s not reached point that we’re going to say this is a toxic waste, we have to be very careful about it. Is not a substantial level right now that I am alarmed, but I am concerned.

The solution for something like this, is what we call eco restoration, is to go in and effectible clean out that sediment, remove that debris that has been coming in to the river, but before you do that you also have to make sure you stop any upland source for coming in to the river. It doesn’t make sense to go and clean it out when you have all the stuff coming in. So combined with eco restoration, dredging out the creek you also need to do things like improve street sweeping, educate people about not blow debris in to they yards, try to be more conscious about what flows in the river in to Millers Creek when you have done that eco restoration. We been looking at this now for a number of years and I recommended this creek be eco restored, that we go in and clean it out and try to install programs that will reduce the amount of sedimentation going in to the creek itself. That include increase street sweeping, education for people what to do with their lawns, you want to reduce the amount of fertilizer you are using, herbicides and pesticides. There’s a need to be in addition to the dredging effort eco restoration also an education effort to minimize future impact from people.

Improving Millers Creek will in fact improve the St. Johns River and will be great if we have other communities in the area to do the same thing to their creeks.